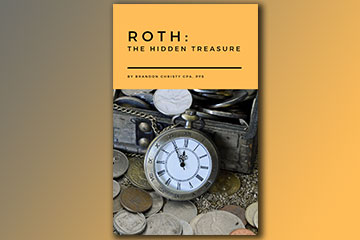 What is the tax status of your money? Federal employees have the option to contribute to either the traditional or Roth Thrift Savings Plan (TSP). The major difference between the Roth TSP and traditional TSP is the tax status of the money. So, what does that mean for you? This question and more are addressed in Retirement Benefits Institute’s book of the month for April, Roth: The Hidden Treasure. Below is a brief excerpt from the book explaining how Roth and traditional TSP function with taxes in retirement.

YOUR TAXES IN RETIREMENT

One of the primary differences between a Roth and a traditional account is when you pay taxes on it. For the Roth, it’s at the time of contribution, and for the traditional, it’s at the time of distribution. The conventional wisdom is that you should defer taxes until later, which would suggest that a traditional account is superior to a Roth. The reasoning behind this advice is that it assumes most people will fall into a lower marginal tax bracket after retirement.

It is true that many Americans may be able to pay less in federal tax by choosing a “tax me later” account, such as a traditional IRA or 401(k). But does this usually hold true for people who work for the federal government?

For example, many federal employees are currently in the top of the 22 percent bracket for taxable income. (Please note that this is line 11b of federal tax form 1040 as of 2019, after your deductions and traditional TSP contributions, and health insurance premiums.) In retirement, we find that many individuals simply end up at the bottom of this 22 percent bracket—not down in the 12 percent bracket. When they begin withdrawing funds from the TSP, they end up paying the same tax rate they would have paid while employed, negating most of the advantages of a traditional TSP.

As sure as the coming of winter or the New York Yankees wearing pinstripes, taxes must be paid. Tax brackets now versus in retirement, other assets, and how close you are to retirement can all factor into whether or not to Roth. It’s a “tax me now” or “tax me later” concept. Roth: The Hidden Treasure may be a useful resource in working through the potential consequences of a Roth decision.