What TSP Withdrawal Option is Right for Me? 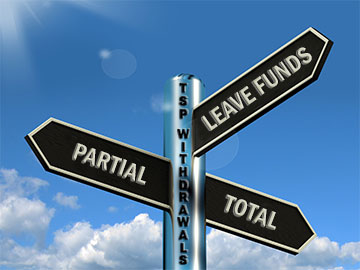 Over the course of a federal employee’s career, contributing to the Thrift Savings Plan is common. FERS employees get the benefit of a 5% government match on contributions to the TSP. After contributing to TSP during employment, eventually the time comes when federal retirees need to access their TSP funds. The TSP has several withdrawal options in retirement. You can leave your money in TSP, although you must begin taking Required Minimum Distributions no later than April 1st of the year following the year in which you turn 70 ½. You may take partial TSP withdrawals every 30 days, or you can take a full withdrawal. With several different routes to choose from, which one is the right TSP withdrawal strategy for you?

Like many areas of federal retirement, there is no one-size–fits-all for how you should access your TSP. Your own unique situation requires a plan tailored for your needs. In order to get a better understanding of what your withdrawal options are, let’s consider the case of Edith.

Edith is a retiree who left federal service after reaching her minimum retirement age of 57 with 32 years of service. Upon retirement Edith immediately began receiving her FERS pension, as well as, the Special Retirement Supplement (SRS). These two legs of Edith’s retirement stool were strong enough to cover her regular bills and provided her with enough income to live on. Edith contributed to TSP throughout her working career and now wonders what the best way to access these funds is?

Since Edith’s daily needs were met through her FERS pension and SRS, she decided to use her TSP money for travel and to spend on her children and more specifically, her four-year-old granddaughter. Fortunately for Edith, retiring after age 55 meant she could access her TSP funds without facing the ten percent early withdrawal penalty. Edith decided to leave her funds in the TSP because she needed to make somewhat regular withdrawals to pay for future trips. By leaving her funds in the TSP, Edith can take up to one partial withdrawal from TSP every 30 days. Edith decided she would use the partial withdrawals to cover the cost of the trips and give her some extra money to spend on her granddaughter.

Edith’s process for deciding what to do with her TSP is a great example for other federal retirees. She first figured out that her FERS pension and the SRS would provide her with the income she needed to live comfortably in retirement. Having covered her urgent spending needs, Edith realized that she had more flexibility with how to use her TSP. Once she came up with a plan for what she wanted to use her TSP for: travel and spending time with her granddaughter, Edith chose the withdrawal strategy that was compatible with that plan. If you don’t have a plan for your TSP, we encourage you to begin thinking in that direction. For instance, if you need the money to meet daily needs, you may need to choose a different withdrawal strategy than the one Edith chose.