Tax Brackets
Bob is 62 and retired. He receives Social Security of $25,000 per year. Mary, a Federal employee, is 57 and will soon retire. She will receive an annuity of $50,000 per year. She also has $250,000 in her TSP. In retirement they estimate their taxable income will be $55,000. They will draw $20,000 from Mary’s TSP, maxing out the 15% Federal income tax bracket (see the red arrow on the graph below). In the event of Bob’s death, Mary will still draw her $50,000 annuity and $20,000 per year from her TSP, creating an estimated taxable income after deductions of $55,000. Since she is now filing single, all taxable income over $37,650 will be taxed at 25% Federal tax based on today’s single rates. In this situation, Mary would be paying a higher marginal tax rate on IRA/TSP withdrawals as a widow. Mary could consider using a Roth IRA/TSP to hold a portion of her retirement funds. If Bob predeceases her, such a move may allow her greater flexibility to avoid paying additional taxes in the future. 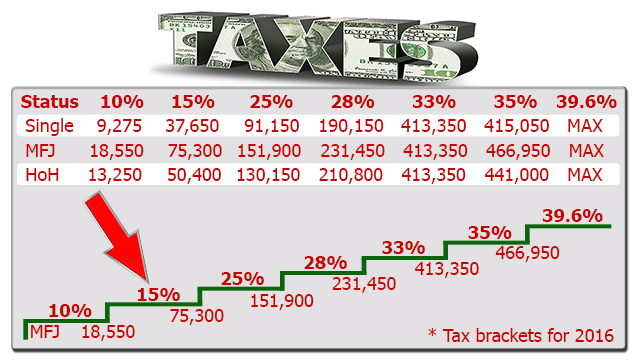 Unexpected Expenses
Beth retired from Federal service 5 years ago. She and her husband, Jeff, have been enjoying retirement until a major medical event occurred this year. They had to draw $20,000 extra from their IRAs to cover the expense. This withdrawal was added to their Adjusted Gross Income (AGI) on their tax return. When they file their return, they will only get to deduct the amount of medical expenses that exceeds 10% of AGI. Because of the taxable withdrawals from their IRAs, they lose the ability to deduct $2,000 from their taxable income. Had they withdrawn these funds from a non-taxable source, such as a Roth account, AGI would not have been increased and they could have taken more off the medical deduction of their tax return.